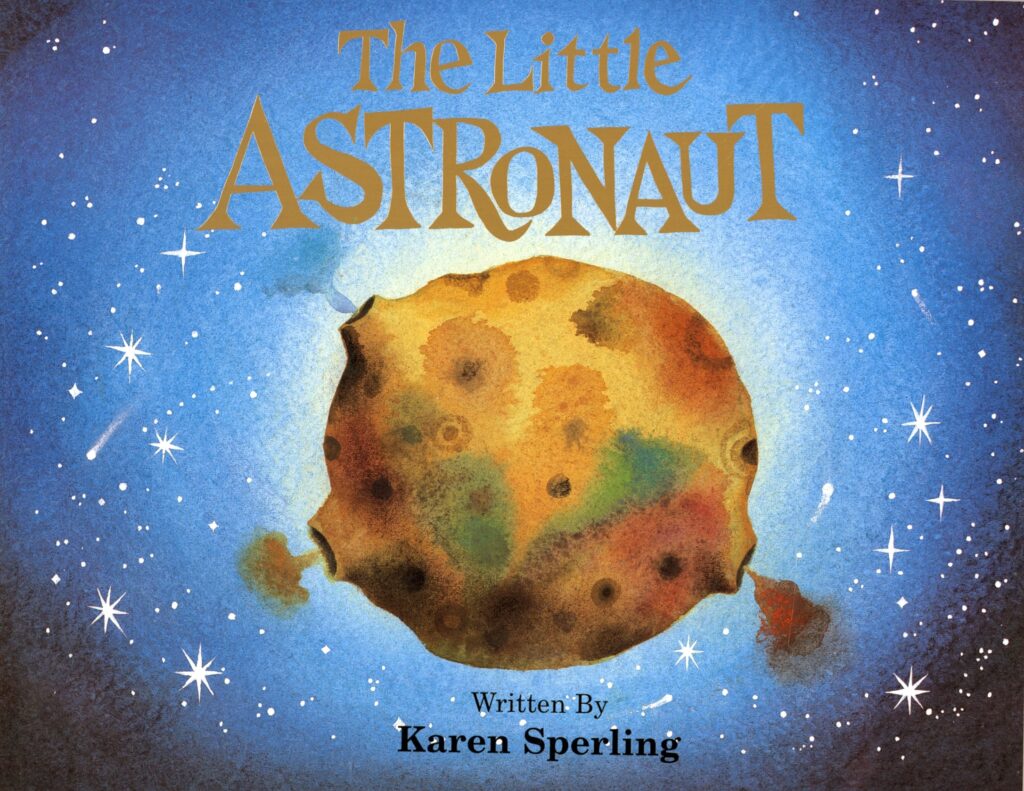 Write Your Own Story Instructions

Read the story, then do a portrait page of how you see the character, and write your own story.

Story Prompt for The Little Painter:

Where would you go if you were the Little Astronaut?

ONCE UPON A TIME…

there was a Little Astronaut who loved to fly in her rocket ship.  Not so long ago, but far, far away, The Little Astronaut was lost in space.  While traveling at the speed of light and cut off from Mission Control, she crash-landed on a small and unknown planet.

She was stranded and all alone.  Without a compass to guide him, she didn’t know what to do.

Where would he find shelter?  And, how could she survive without food and water?

All she could think about was home: her house and warm bed, the smell of eggs and bacon in the mornings, the feel of snowflakes on her face in the middle of Winter.  When she remembered running and playing ball in the fields, she began to cry.

While feeling so sad, The Little Astronaut picked up her tank of oxygen and checked her space suit for holes.  She strapped on her lead boots and began to search for food and shelter.

She wasn’t very hopeful, but moving seemed to be better than sitting and doing nothing.  Off she went, across the gray, dusty landscape.

After all, she was lucky.  She hadn’t crashed on a planet where horrible aliens might tear her to bits.  At least, while floating weightless in space, far, far away from Earth, she hadn’t crashed into an asteroid made of slimy slush that would have swallowed her up.

Finding nothing, The Little Astronaut decided to return to her crushed craft for a rest.  Huddled beside the wreck, she fell asleep.  But when she woke up, she still felt miserable.  It had not been a terrible nightmare.  She was still lost.

The Little Astronaut made up her mind.  There was nothing she could do.  She decided to remove his oxygen tank.  Without bothering to remember all the beautiful things she would miss from home, The Little Astronaut unscrewed his helmet and lifted it off of her head.

Nothing bad happened.  She didn’t begin choking and gasping for air.  Happy to be alive, The Little Astronaut felt like dancing.  She removed her lead boots and began to twirl around.

All The Little Astronaut needed was a good wholesome meal. There was no growling in her stomach or dryness in his throat.  Not hungry, nor thirsty.  That was odd.

The Little Astronaut took another deep breath.  She could taste food.  All she had to do was think about what she wanted and she got it.

She imagined a big steak dinner, French fries and a large plate of steaming vegetable. Yes, she could taste them and she felt quite satisfied.

Needing shelter and a place to rest, she pictured a finely built dome with a big soft bed in it.  It appeared.

This was truly fantastic.  Plenty of food whenever she wished it, a nice home to live in, all of it coming out of thin air.  Surely, she could live like this, forever.  The Little Astronaut was so happy, she gladly lived alone on the small planet for quite some time.

Until, one day, The Little Astronaut began to miss the sound of music.  She began to think about his favorite songs.  But nothing happened.  The air was not filled with the melodies of lovely symphonies nor the lyrics of popular tunes.

Disappointed, she went out for her daily walk.  The farther she went, the sadder she became. Finally, she sat down beside a peculiar rock sticking out of the ground.    As soon as she touched it, it began to hum.

What luck!  By touching the shining rocks, she was able to make the loveliest sounds she had ever heard.

For a long time, life on his small planet was good.  Always giving her what she needed when he needed it, she thought this extraordinary planet was her friend.

Days drifted by happily.  Until one day, The Little Astronaut realized that though she had everything she wished for, she didn’t have anyone to share it with.

While she was feeling so sad, something strange was happening.  The Little Astronaut’s crashed ship was mysteriously repairing itself.  As it sat in the shadows, it was being rebuilt.

Electrical wires were re-connecting, while dented steel plates were remolding.  Broken dials were repairing, while spilled fuel was getting sucked back into their tanks through patched hoses.

One day there was her ship fixed and ready for take off.  She couldn’t believe it.  How had this happened?  While she had been able to get all the food and drink she wanted, her ship had received the repairs it needed.

Did this mean she was ready to go home?

The Little Astronaut didn’t have to think about it for very long.  The moment her spaceship was prepared for take off, her little cabin disappeared and she started to gasp for breath.

She put on her discarded spacesuit and placed her rusty old helmet over her head.  Just in time, she plugged herself into her supply of oxygen.

There was no choice.  The Little Astronaut boarded her craft to take off into space and head for home.  While she looked back at the bleak, little planet that had been her only friend far, far away, she wondered.  Maybe it cared for her and couldn’t stand to see her so lonely.